Possibility, Plausibility, Probability, Provability are the stepping stones that a concept follows if it makes it's way from the ether-world-mixture-soup of all things conceivable, regardless of how absurd, to the realms of believability in a logical mind.

And on that note I officially declare the entire 'audiophile industry' to be a cult and 'stereophiles' are an extremist faction thereof. These odd practitioners believe such concepts such as advantages of directional speaker wire, the belief that a 3 foot long AC cable will somehow magically improve sound, cables need to have break in and now bringing it to new heights, $959 device that claims to improve sound by merely being placed in the same room. 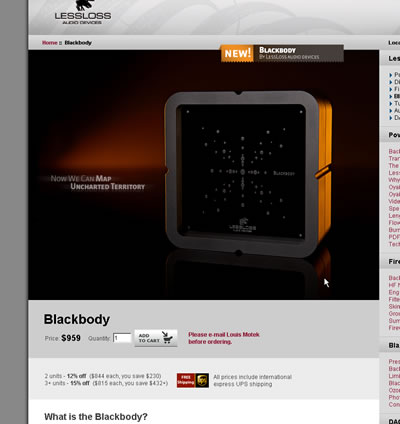 While none of these phenomenon are measurable, at least they are painfully costly. As far as I am concerned it is the same as believing in the apocalypse, aliens and e-meters.

It is not that those concepts are impossible. And perhaps with some self imposed ignorance I guess they could seem plausible. Yet they score almost no points on probability to be accurate scale and they are definitely not provable.

Really? A $2000 three foot ac cable that plugs into the wall outlet that is in turn connected to a few hundred miles of the power company wires makes your speakers sound different?.

Really? You can hear the difference if you reverse wire direction when music is an AC signal and it therefore must travel in both directions equally?

Even if you do start with the context that everything is possible and then you locate something that is highly improbable and definitely not provable, why embrace it? 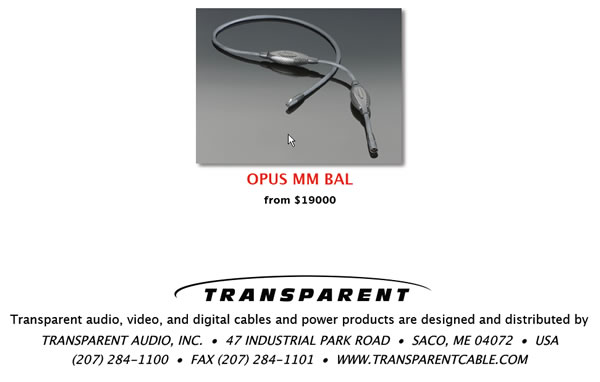 These are actual people that are buying into swirling nonsensical concepts and being manipulated out of large sums of money and time as the snake oil salesmen offer false guidance in their pursuit of extremist audio quests. Yikes, what if the stereophile manufacturers were to evolve into concepts like sacrificing animals over the speaker wires to influx them with natural life energy and add new levels or realism. Hey, I bet you could get $40,000 per cable then. Shiver! I find die hard beliefs in nonsensical really really distasteful and creepy.

Another thing I find interesting is that there appears to be absolutely no culpability for false claims. With food and drugs there are rules and regulations. With finances, insurance, vehicles and even toys there is at least some for of group that monitors and calls on the manufacturers to have at least some legitimate basis in their claims. Try selling a toy truck that claims to have a working horn sound when indeed it does not. The consumer buys the toy, presses the horn, no horn, returns toy, complains. Stores stop carrying falsely advertized toy, someone sues. But in the realm of audiophile, none such system exists. Claim that $1000 box makes room sound better. Consumer buys, consumer convinces self he/she hears it. Or consumer returns it to store in shame that his/her ears are not able to hear the farce. Store then becomes more elite as only those special people can actually hear the non existent magic.

I guess it is more like art in that the value is perceived, not actually real. But wait. Unlike art, these are electromechanical devices with actual claims of specific function. That is where the critical difference lays. I truly believe audio manufacturers should have to definitively prove function before making claims.

Here is a cool article by Roger Russell former Director of Acoustic Research for McIntosh Labs:

I find this especially interesting as McIntosh is one of those legendary audio manufacturers highly revered by the audiophiles buying the magical concepts that Roger is undermining in this article.

Ahhh, but enough bashing of the easily bashed. I have spent my evening so far listening and measuring headphones. No ghosts, no magic, no voodoo. In fact quite the opposite. Just a random splatter of various gear and looking for clear repeatable results.

The Possibility that I can find some fairly flat and accurate cans is Plausible and actually a fairly strong Probability if I test enough of them and once I get done I will pass on the Provability so the results have Credibility.

I suspect that the Wall Street & the banking industry are "audiophools" and this is what they're spending all the bailout money on. Who else would have the funds for such nonsense? Personally I'd like to flog the "inventor" of that 3 ft. XLR cable with their own product. Really, this crap should be illegal and the scam artists prosecuted buy the FTC. I'd be really curious to know how many of those $19k cables have actually sold. Maybe I'm in the wrong business ;-)
it's fraud! Snake oil salesman.
the funny thing with all these home theater guys and stereo guys is that they play recorded movies or recorded cds as there test point which vary so much between well mixed and balanced to extreme mastering to different music/playing styles to recorded at diferent samples or bit rate. they don't ever measure via pink noise or sine waves or any other kind of audio test point, rather a completely biased sounding recording. It a joke how they can say there is a difference when the music they use to test their $19000 cables was recorded in a recording studio using $30 cables. how can a $19000 cable all of a sudden make you able to hear new sounds on a recording that's already been recorded using way cheaper $30 xlr cable. does the $19000 cable also make the microphones used on the recordings pick up more sounds, more ambient, more frequencies? at the end of the day people are gullible and it makes me feel sick how they are getting ripped off this way or that they would actually buy a 19000 cable! it would take me about 2 minutes to make this cable i am willing to make it for half the price for them.
And to think none of these $19000 cable were available for the Beatles or Pink Floyd? How in the world could they have possibly gotten the records to soud that good?
Drugs. Lots of drugs.
b b b but I can hear the extra warmth and the soundtage totally opened up for me, my ears are far more sensitive than your ridiculous 'measuring' devices!
Ha!!! Plus, the most expensive aspects are always the ones that can not be tested. What a very strange phenomenon.