Two hours of sleep and then a bus ride to Pukkelpop in Belgium on the Ocho with Blink. Yes, we are actually on production bus #2 but the core Blink crew refuses to ride on anything but a bus with a #8. Oh and I forgot but I did grab a few shots of the Soundgarden Vic show. 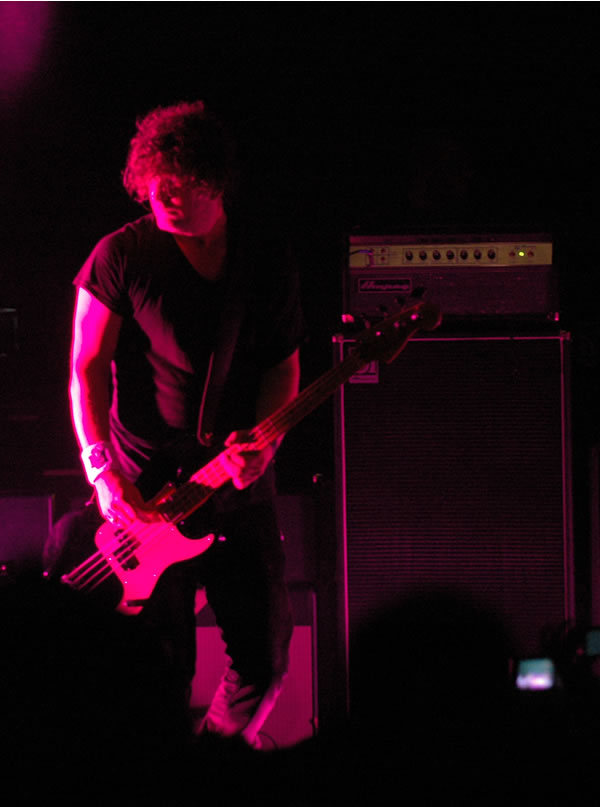 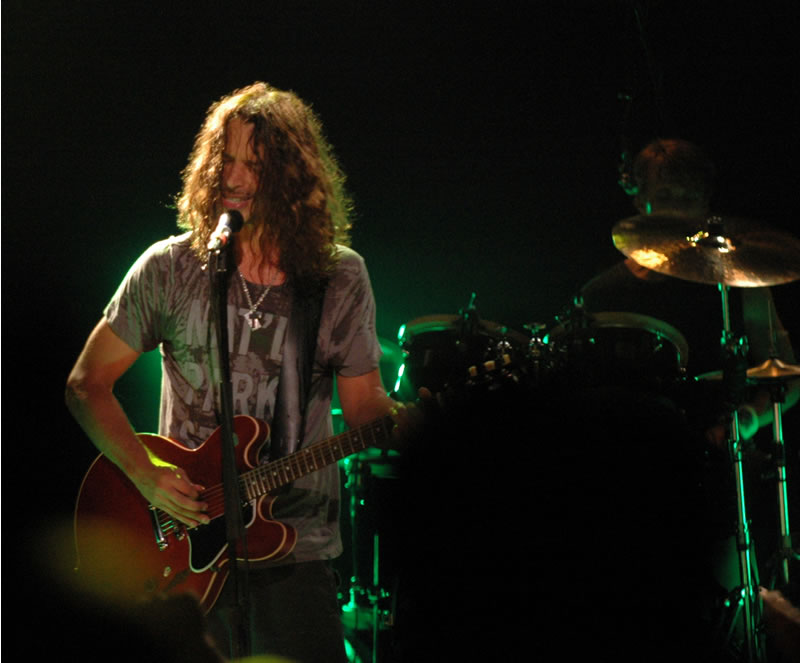 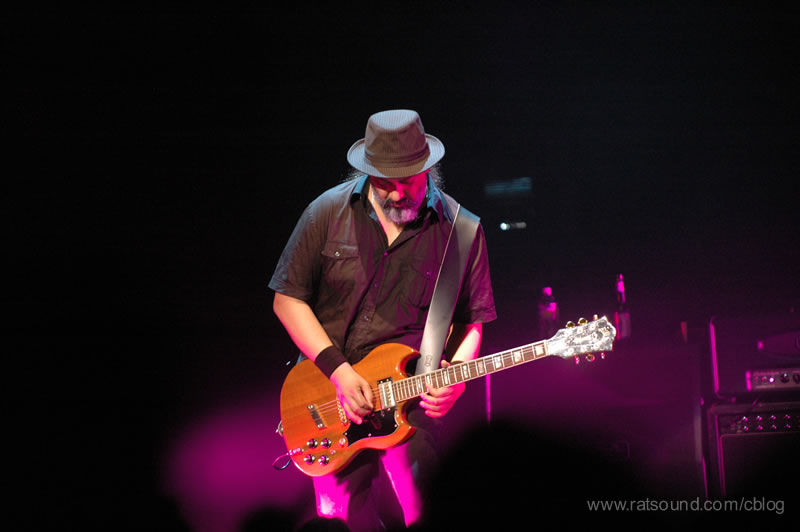 So prepping for Blink we soundies get word of an all new ground support drum riser with two spinning axis, being built. Hmmm, end over end flips of a spinning disk, this should make for some interesting cable runs. We have no idea how many flips or spins, just that it is going to need audio and AC power and if the we lose audio during the drum solo with a spinning drummer doing a solo, well, to say the least, that would be really bad.

The plan as presented by the creators of the contraption was "just run audio wireless." Hmmm, where would that put me? Run wireless drum mics the entire show? Yuck. Run hardwired and switch to wireless for the drum solo? Yuck.  And what kind of wireless?  We need full 48 volt phantom power for half the mics up there. Start swapping out mics? Oh my, this is bit of a mind knot. Figure out a hardwire solution? But what if it does not work? We wont even get to see the riser till three days before I leave for Soundgarden so we can not count on implementing a hardwired solution.

After a bit of pondering and a call to Showrig who was building the contraption, they agreed to have some extra holes drilled, and I think I have a way to route the cable. Thank you Justin! for the updates and taking care of getting things worked out. Then a custom snake and spare snake, 20 ch mult to tinned bare ends was ordered plus a box with terminal strips and a mult. This would allow the cable to be threaded through openings of unknown dimension and attached without soldering. For the next several weeks Steve Walsh and I brain stormed and waited for the various pieces to arrive.

So here she is in all of her 4000 pounds of glory. It was all about getting the audio working with minimal complexity and high reliability with a big pile of unknowns and little time for errors as the whole shebang shipped to Europe 6 days after we get our hands on it. 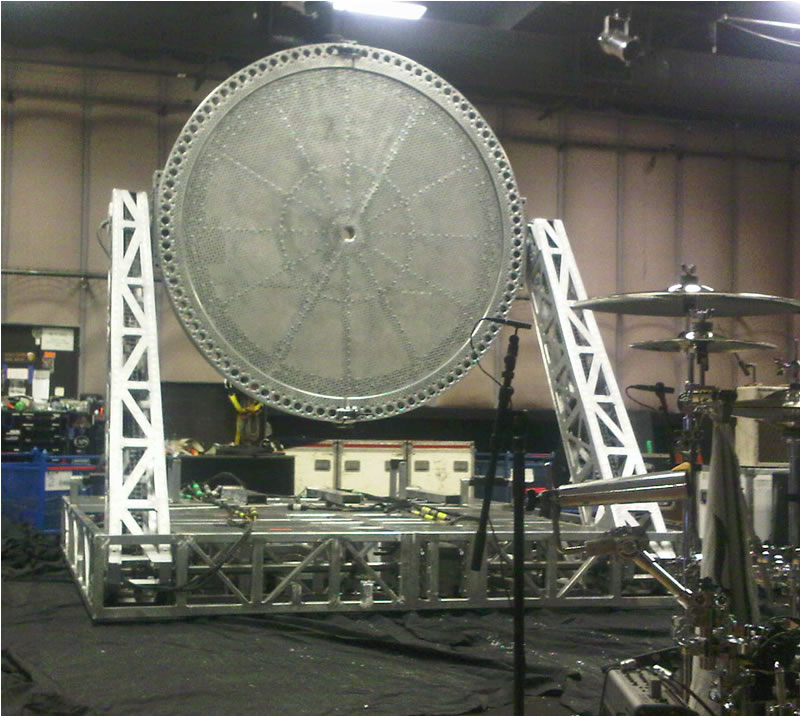 The two arms lift, the disc flips end over end and spins at the same time. Since  and audio failure is a show stopper, it's all about redundancy so after some looking around, decided on the cool Sennheiser SKB2000 plug in wireless transmitters. Full 48 volt phantom, lots o channels and they come in little leather pouches that can clip to the cymbal legs. Unfortunately we needed a minimum of 10 and finding 10 of these matched rarities is both really tough and/or really expensive. So we decided to buy them. Oh, and hey, we will be selling most of them as well as the matching receivers after the tour next month so let Daniella know if you are interested. Basically they just plug onto any mic and make it wireless.  http://www.sennheiser.com/sennheiser/home_en.nsf/root/professional_wireless-microphone-systems_plug-on-transmitter_2000-series_021738

Locking in the wireless backup took a pile of weight off. We now had at least something that had a good chance of working assuming we did not get drop outs when the metal riser flips and we don't get crushed by interference in Europe. The AC power backup was easy, just bolt down a UPS unit on the riser and pull power during the solo and let the run off the battery backup for the 6 minute adventure. Here are the 10 wireless transmitters hitting a set of snake tails into the mult of the stage box. 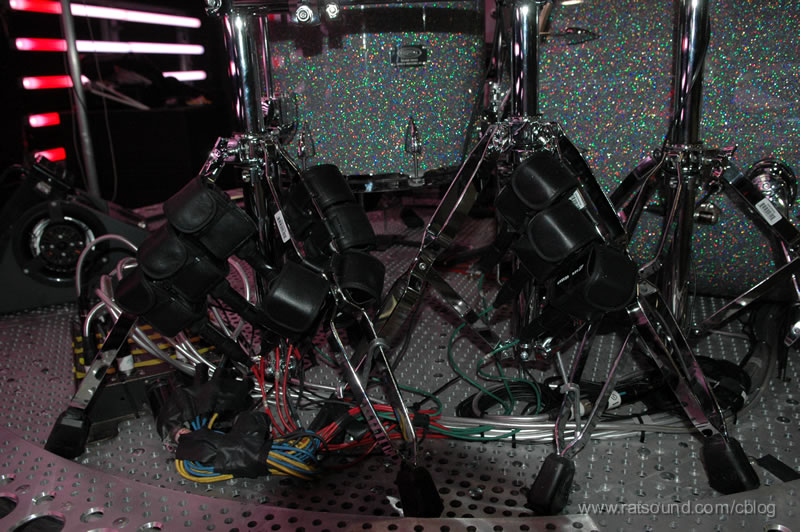 The other parallel mult of the stage box hits a snake and power cable that feeds through the center hole. Turns out we were barely able to fit the 20 channel mult cable after all. It was less than a 1/32 of an inch to spare. 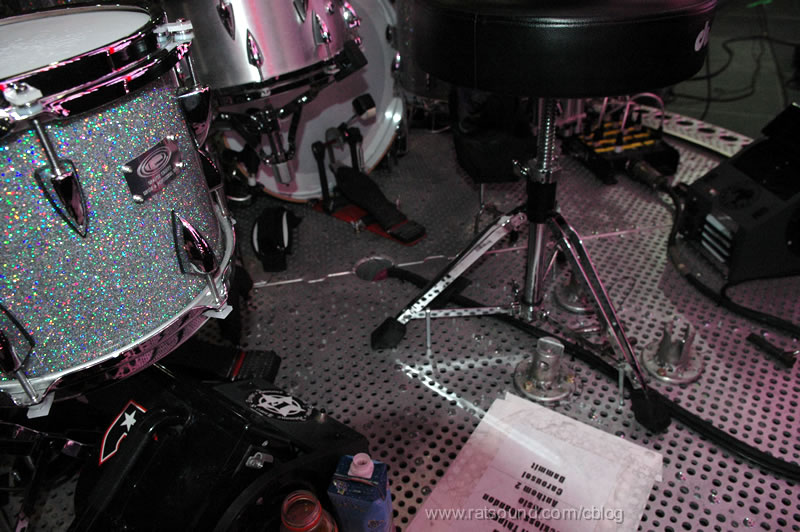 This is the cable drum that Showrig added to the riser for us with a plexiglas bottom. Since the riser splits in half, so does the cable drum. The cable then feeds through a small trough on the left. Note that the drum does not spin and is attached to the outer ring that only flips.

The rotator post which does spin, holds the cable such that it coils and un coils itself. 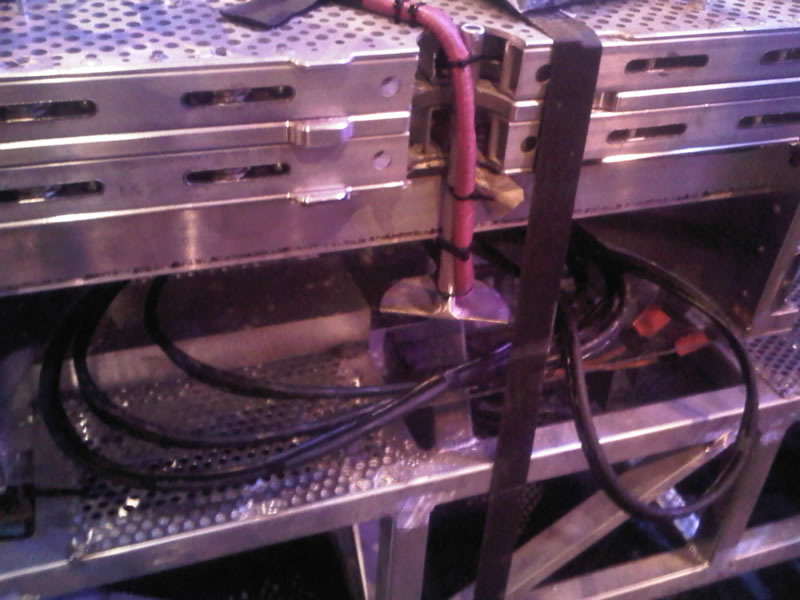 After traveling down the non spinning trough, the cable enters the axle past the spinning disk and exits the end. The twist caused by flipping can be manually paged by our SSE monitor tech, Perttu. Oh, and I forgot to mention, the riser also drives downstage, turns to one side, backs up and turns again before driving back home again. The final choreography has three spins a few partial rotations and a single flip over. The tour is only 15 shows so we are pretty confident we wont have to change the cable out. 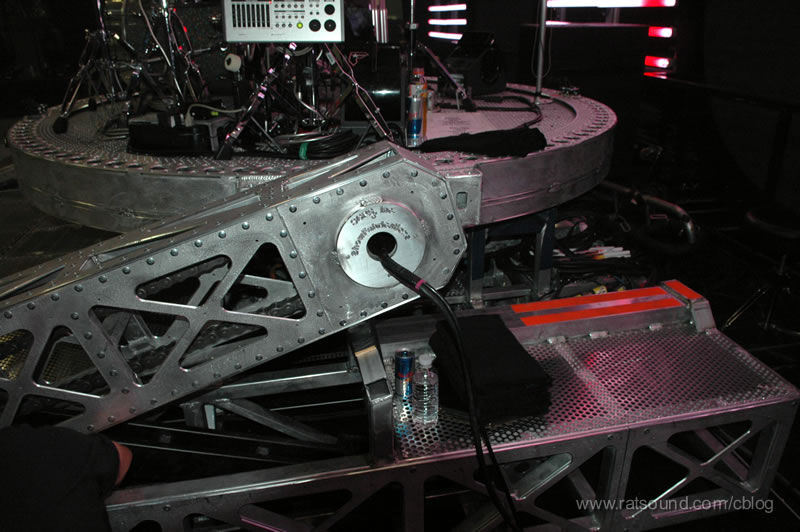 Meanwhile, we also have the 10 wireless redundant channels as a backup in the event the cable gets caught and chewed. The only weak link is that a chewed cable will most likely short out the mic lines but fortunately if we had to, we could risk Perttu's life and have him dash up and pull the hardwire mult except during the flips and spins to save the finally of the solo. And there you have it. I am sure there are plenty of youtube videos getting posted so do a search if you want to see the actual machine in action. 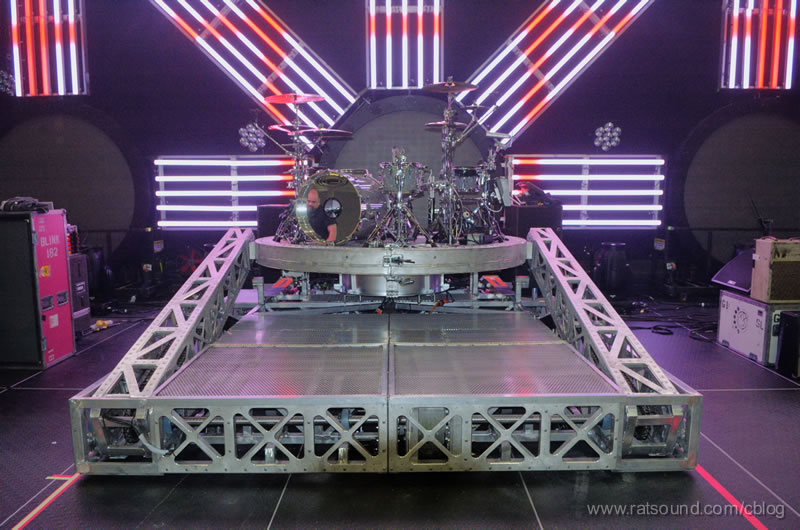 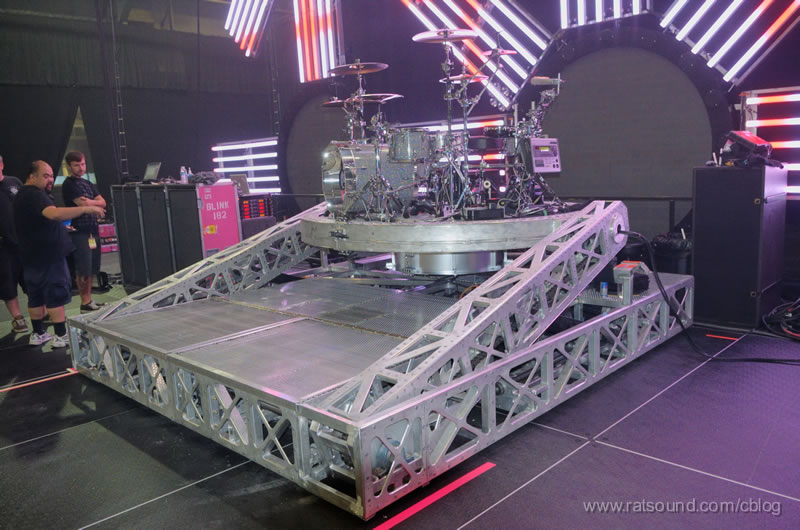 So now we have two shows under our belt.  Both the wired and wireless lines are solid and the wireless does not sound as good but is good enough to get me through if need be.  I have the wired drums on one VCA and the wireless on another VCA. I can slide between the two sets seamlessly.  I actually started bypassing the gates on the wireless toms and snares and adding them in when Travis plays softer parts. And on to other adventures....

It has been a while but we are closer to done on the NL4 Sniffers, here is a shot of the final production first run. Soon soon. 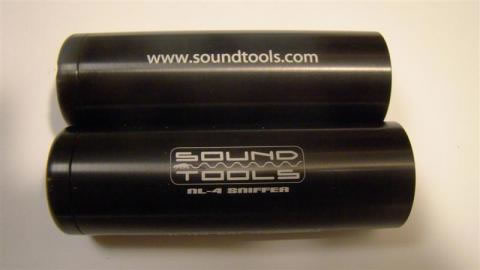 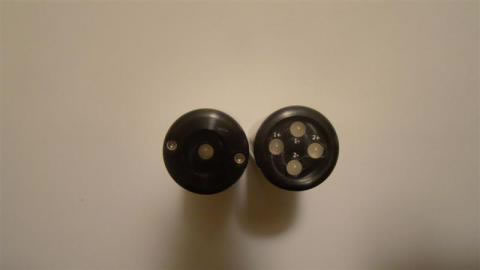 Oh, and while I am nerding it up, here is one for my analog brethren. Here is a significant and almost always overlooked issue I constantly see on Midas and other consoles. Can you spot the issue? 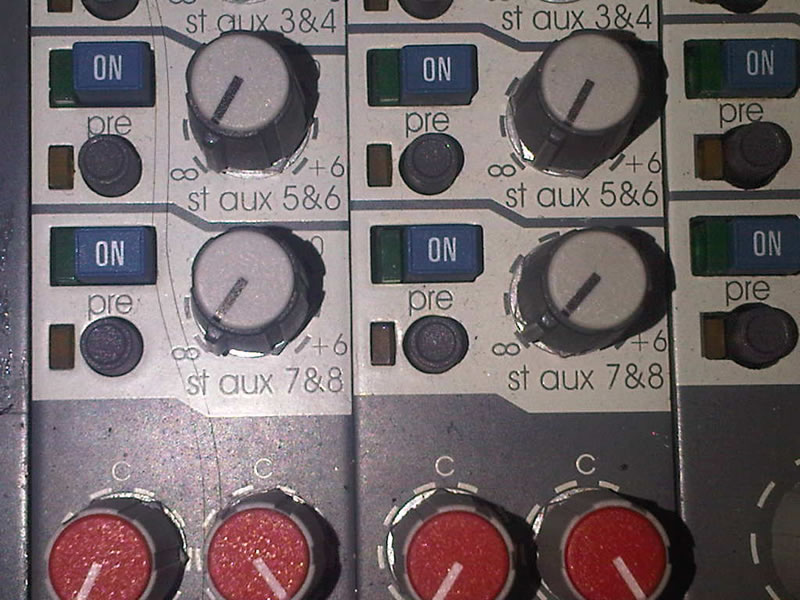 Notice the st aux 7&8 knob lower right. All knobs are turned all the way down bit it has been put on such that it points exactly at infinity while the other three are swept to below infinity. While this ma seem innocuous, it is common, especially when dialling up matrixes and such to set the knobs pointing at "0." Except when the the knob is incorrectly placed on the shaft, it will send at a lower volume level than it should due to not being rotated far enough yet visually looking correct. Now take the cumulative effect of this occurring on an aux send, to a group to left and right and then to a matrix and you can get very audible imbalances. The correct knob placement is for it to point below infinity when turned down all the way.

Oh, check this out, Nick Taylor made my day. Imagine getting a message asking me if I would like to go for a surf in the North Sea while I am in Scotland. 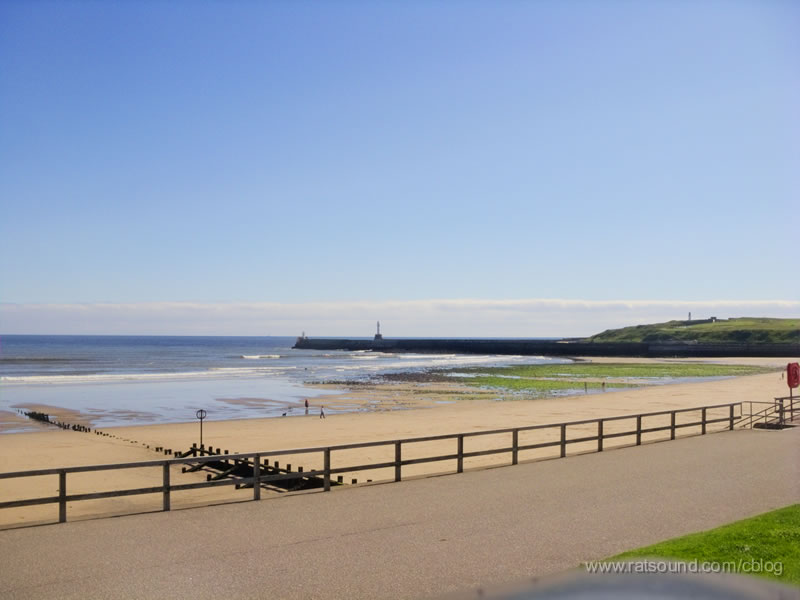 Instant YES! So he pics me up at the gig, loans me a suit and board and off we go to some chilly water and waves. 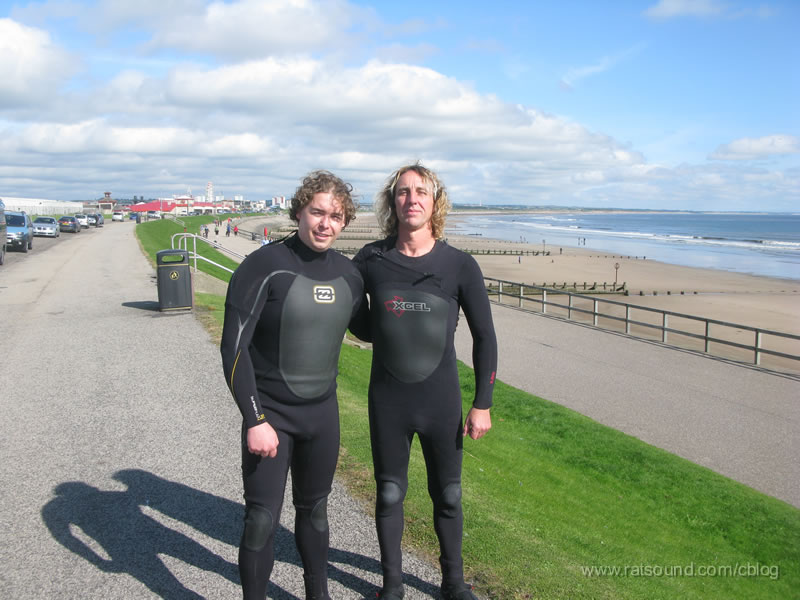 How big? Well, Ronnie Kimball and I have perfected a wave measurement system. The great neutralizer between the whole measure the back of the wave, front of the wave, exaggerations or whatever. All waves are 2-3 ft.and if they are bigger, 2-3 +, and smaller is 2-3 -. Done. So these waves? Well, they were 2-3 +. Oh, and the water is never 'cold,' only some days are just more 'refreshing' than others.

A quick walk through a small 500 year old village 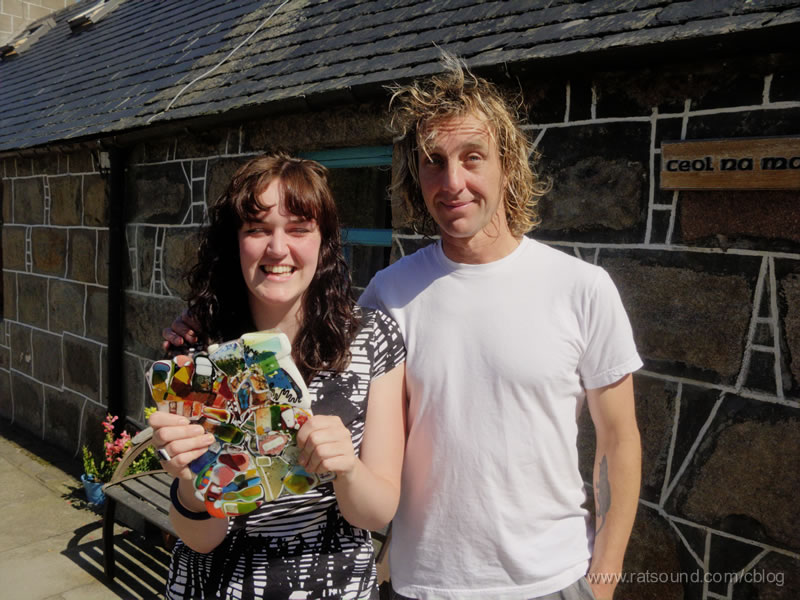 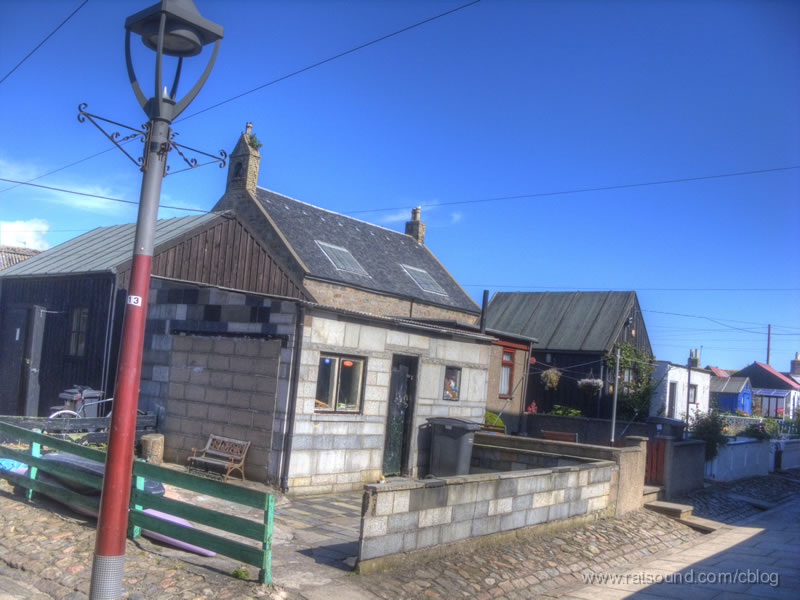 And then back to the gig for another terrible day at the world office.

PS, If I am ever on tour near you and you want to come take me surfing, I am in!

Hi mr. Rat, Cool solution with the drum riser! Saw some videos on YouTube of the Glasgow concert. Excellent! It sounded great even though it was on YouTube. Regards, Merlijn
If you ever get a bit of time in Vancouver, it's worth taking a side trip to Tofino (though the water is immensely cold!).
Hmmm, well dude if you venture up to Nor Cal ,maybe we'll get some of the Nor Cal O'Hana together and take you out to surf in Ptown but I'll believe it when I see ya up here.
Dave, One option to consider is install the mic-pres on the riser and run only one single CAT6, Fiber, Both or backup with wireless since its just data after A/D. One product is ProCo Sound's Momentum Digital Snake. You would need multiple MI8(8 in) and MO8(8 out) units. You can control the gain remotely with a computer, IPod or hardware device. You can also drop off more MO8s for monitor mix also. Add a MO8 on the riser if the drummer needs a hard wired IEM also with no additional cabling back to the stage. The downside is that its not a cheap solution. http://procomomentum.com/?page=system Since ProCo runs on IEEE standard GIG-E ethernet it is possible to run high a end wireless access point and transmit wireless back to the stage for redundancy. The ProCo only use 48kbs per channel = 1536kb or 1.5MB for 32 channels so capacity is not an issue. Keeping the latency low is key. http://www.ruckuswireless.com/products/zoneflex-high-end/7962 Your posts are great. Keep em coming...
Glad to hear you enjoyed Aberdeen. Cheers for the Blink show too, sounded excellent and the riser looked stunning in real life.
Thank you!
How is the Roland drum module integrated in the drum set? The module faces outward and appears to be unusable to drummer......just curious.
It is a triggered 808 sound from a drum pad.
That drum riser looks immense! Im going to have to check out the Youtube footage!
Dave, Another wireless solution although you have a working solution you may want to consider Lectrosonics in the future totally out preforms Sennheiser Lectrosonics Venue Modular Digital Hybrid Wireless "6 Channels of wireless with build in antenna distro "1 RACK SPACE" http://lectrosonics.com/hybrid/venue/venue.htm Plug on 100mw transmitters with selectable 5, 18, or 48v pp http://lectrosonics.com/hybrid/hm/hm.htm
Did not want to use digital transmitters for this application as they have latency which would cause issues. We used the wireless as backup in case hardwire went down, electrically recombining latent and non latent channels was a situation we wanted to avoid