I love my pockets empty except for a cell phone and the omnipotent brightly colored ID tag dangling from my belt loops. The sensation of pure freedom. A single page road map defines my 'must do' events for the day. So grounded and clear the world becomes. The biggest challenge is to try not to lose any physical object that pretends it is important. But what is expended to drop into this reality of unsustainable wanderlust? This world of tour, pure motion of a bus rolling 60 while home slowly rotates with the spin of the earth. Where to plop myself down mentally and at what balance determines happiness or misery. To stay fully immersed in the world of home while my body jumps through all the extra hoops enduring mishaps and chewing through time in order to drag home a paycheck and some stories? Or chose the perception that everyday is beautiful in every way, regardless of how miserable it may appear. There are no problems, just an endless stream of puzzles to solve as each day a brand new city is delivered to feet. When I first quit my job at Hughes Aircraft to rent out small PA systems with a van, I leaped from that cliff into the ethereal structure less world. I remember taking off my wristwatch and crashing it into the ground as I swore off being chained to concept of time. I remember sitting in Mark Mahoney's tattoo studio as I asked him to keep enlarging the photo copy of the rat intended for my forearm. Bigger, bigger, bigger, I wanted the tail of my first tattoo to be visible even when I wear a long sleeve shirt. I wanted to make sure I would never be able to work for anyone offended by it. I wanted it to remind me to be adventurous, curious and to have the endurance to succeed regardless of the obstacles. I wanted it to remind me never to forget that barriers and strings are only as strong as I allow them to be. I realized I am guided by the failsafe wrench-thrower built into my mind. As if a part of me already knows where I am headed and happiness is only felt when the right decisions are made. Wrong turns down paths un-righted cant help but turn sour into depression, anxiety, anger, frustration and finally destructive wrench-throwing irrational actions that break the pattern and hopefully end up forcing a me to change directions.

Well alrighty now how about a bit of soundnerdery fun?

Ok, I have written about grasping a consist ant reference points with headphones, an analyzer and physical settings. I did a video and wrote about my take on what EQ's what in a sound system. Here's something pretty simple that is another piece of the 'get a sound system to sound good' adventure.

There are various ways to EQ a sound system. Voice mic, pink noise, familiar cd, tone sweep, pulse and EQ on the fly. Over the years I have put much thought into the concepts of perception of sound versus tonal balance. Part of the method I use to EQ a system is keeping an eye on tonal balance over time. The tonal balance of a show is constantly changing. Having a readout such as an RTA or spectrograph gives a series of visual snap shot or shots with a history. What is often overlooked and tends to be more relevant is the overall tonal balance averaged of the course of a longer time periods. Our ears are forgiving and enjoy the short time frame tonal diversity yet if certain frequencies are dominate over a longer time frame, it can be undesirable. With short period time averaging of a few seconds or less we see these lines moving around but it is difficult to accurately see the trend of which frequencies are persistently too loud. By using a longer averaging time of 10 seconds or longer, you can tame the readout so it gives a stable read out more similar to what we see when using pink noise. Now with this stable line it becomes much easier to EQ the system with music as a source. Taking this further, if you do some long period averages with your test CD and save the curve when you have a desirable system tuning, you can then display this curve over the live band's real time long term average and keep yourself tonally in check over the course of the show.

Finding the show times of the various bands requires a bit of research. 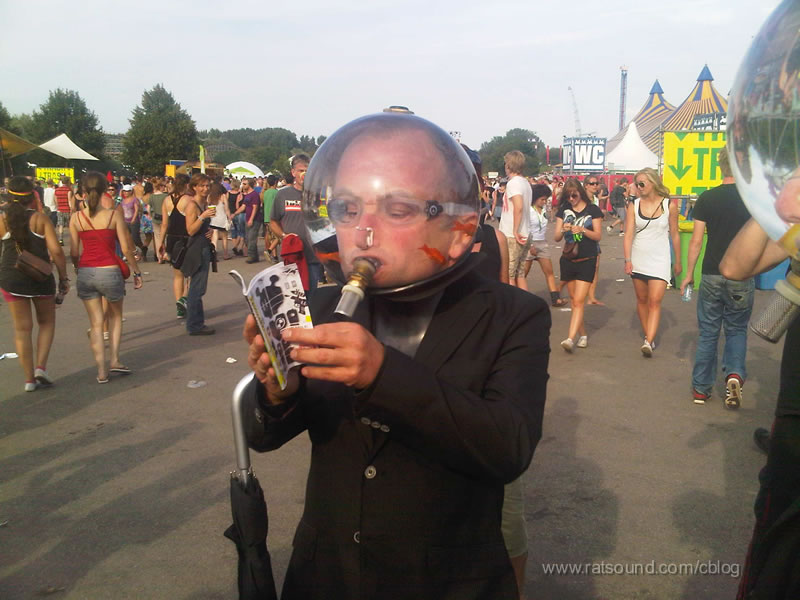 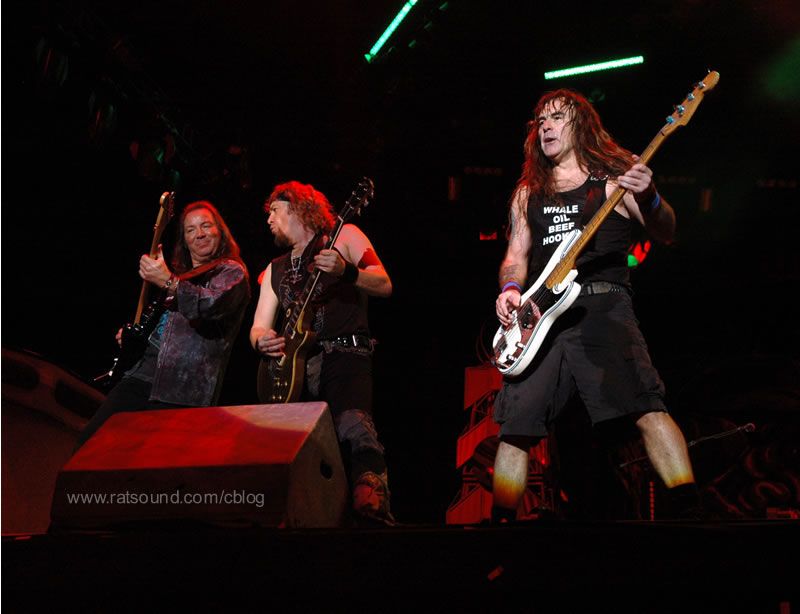 So I have decided to try something new for this tour and mix sideways. Mix with my left, band in front and free hand for a drink in the right. Hey drink is far from the board and clear view of the system analyzer, racks and band. All good! 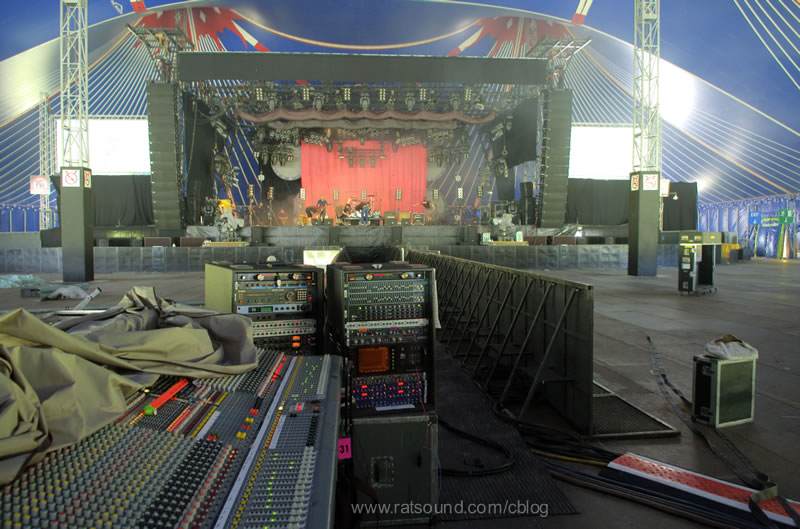 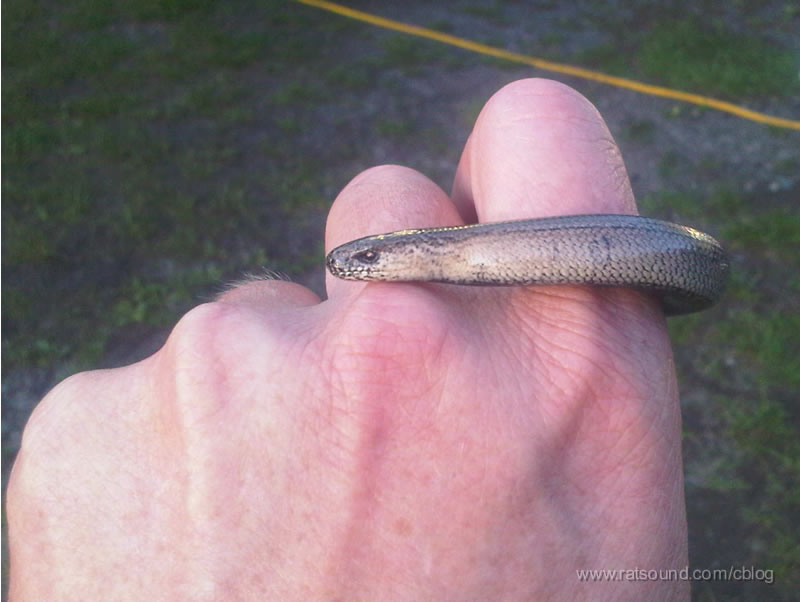 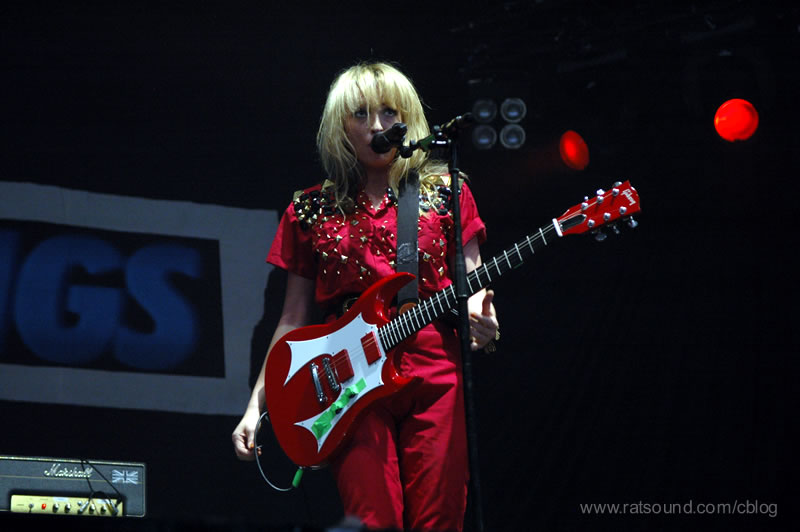 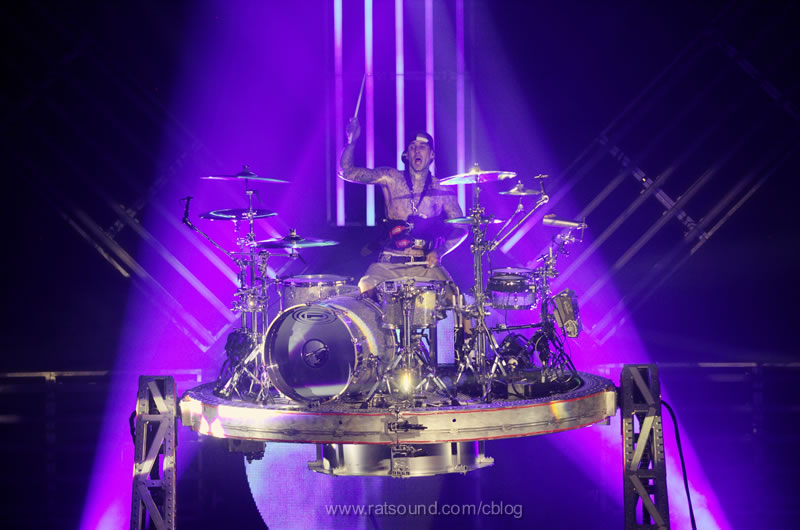 And meet Triggerfinger, rocking show, super cool and one of those groups of people you just instantly like and can hang with. 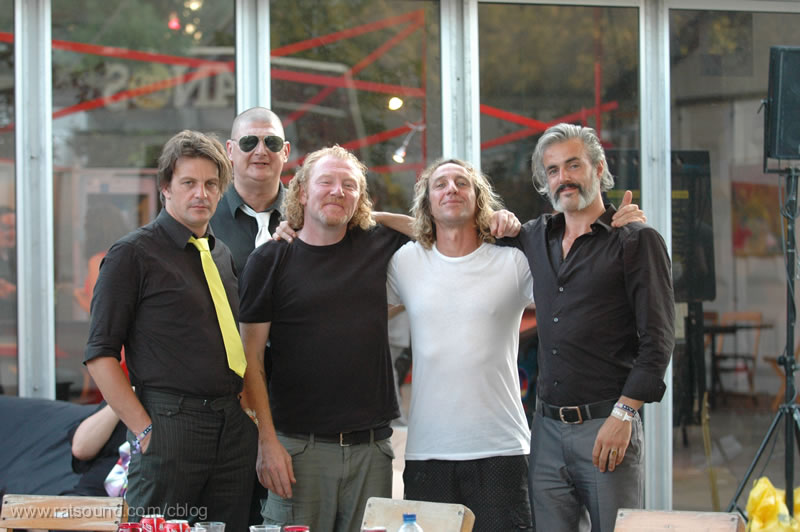 Alright. just finished Germany show 2, festival three on a K1 rig and the off to Hamburg.

if thats the main stage thats pretty small.... it looks about the same size if not smaller than the Radio 1 stage at Leeds Festival :L
It was a mini-festival
i've been to the highfield festival and hamburg shows and did not know you were the foh guy on the europe tour too. sound was great, especially in hamburg - good work! but was there a problem with the drum riser or why was there no drumsolo at both locations? i would have loved to see that monster in action!
Doing a drum riser setup like that on a festival tour is very complex and safety is a prime concern. If for any reason there are safety doubt, they do not do it. Also they tend not to do it unless it is a headline slot.
Dave, Just a quick note to say your words in the "Indelible Ink" section hugely inspired me. I've been on a similar path of self employment/live and studio engineering. By the way, I remember seeing the Peppers at Woodstock 94 and at the Roseland ballroom in NYC two days later. I assume you were doing FOH. Both shows were great (sound and performances) Kind Regards, Dave L.
Awesome and thank you for dropping me a note, I really appreciate it!
Hi Dave, Enjoyed yourself at Lowlands I see? I did too and checked out Blink 182 though that's not really my cup of tea. No comment on your sound though, I'm just a lampie with earplugs in, sorry :) Too bad the rotating drumriser thing didn't work, was really curious about that. Ah well, there's still Youtube fortunately.